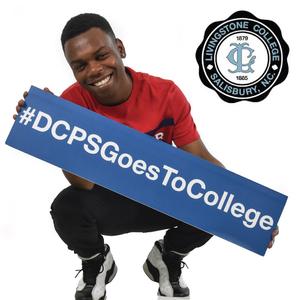 Diante Martin first visited Livingstone College through a college trip organized by Ballou STAY High School.
Through the trip, he toured the campus and met students – an experience that he says made him realize that the school would be a good fit. “They are giving me an opportunity,” says Diante, and he plans on taking full advantage of that opportunity. During his time at Ballou STAY, Diante says his favorite class has been digital animation – a topic he had not previously explored. Through the class, he learned how to create an animated cartoon based on a self-portrait. He says that he has appreciated Ballou STAY’s mastery-based program. “I can work at my own pace,” says Diante. Thinking about what advice he would give younger students, Diante says he wants them to stay focused on their goals. “Don’t let [anybody] tell you that you can’t do what you want to do.” #DCPSGoesToCollege